After we got over our fascination with worms, someone else mentioned clouds and so this last week, we’ve spent looking at the clouds.  One of the first misconceptions they had was that clouds were air/wind.  So we did some experiments to determine that clouds are not in fact air or made up of air:

I made Wind Bags out of items that were around my room: 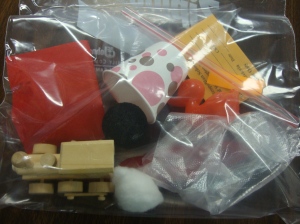 Here’s a list of what was in the bag:

The idea was for the kids to move the things in the bag with air.  I just laid the bags on the tables and said, “Make the things in your bag move”. There were some interesting solutions. 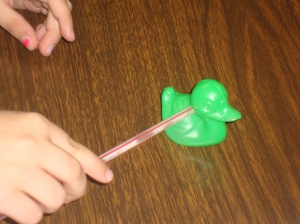 After about 20 minutes of the children moving the materials around, we got back together and made a list of all the ways we moved each of the things.  The one common thing was that everyone had tried blowing on all of the items to get them to move.

We then discussed all the things that air could help us do: move things, carry seeds, blow up balloons, help us drink out of straws, move weather to us or away from us.

The next day, I challenged the children to find a way to make a piece of paper stick to their tummies  without using their hands, chins, tape, or by sitting down.  After about 20 minutes, only a few of the children had come close to an answer, so I showed them how we walk quickly and air would hold the paper to us.  Then we all tried it:

They would start out by holding on to the paper and then once they started running, they would let go.

After I had convinced everyone that clouds are not air, we moved on to learning more about clouds:

We observed them in the sky on several different days either from in our room (we has several days of severe thunderstorms) or from outside on the playground.  We also made a KLO chart, but in a little different order from the usual KWL chart.

The K was first to determine what they Know, then the L to find out what they wanted to Learn, and the O was after we observed some things about clouds.

We are still in the process of filling in the O portion: 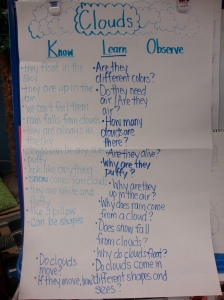 Here are some of the books we have read: 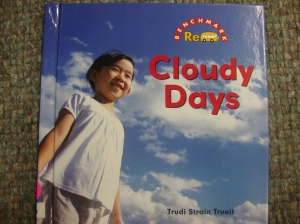 I’ll post some more things from this week later on.  Next week is our last full week of school, then just two more days after that! 🙂

The Great Worm Experiment of ‘010

Last week I used this great idea from my friends Steve and Amy Smith (Thanks guys!!).  My kids decided to call it the Great Worm Experiment of ‘010.  They all call 2010 ‘010 because all the years before them were called something with an ‘0! 😉

We began by discussing, no wait, they began discussing worms when they came in from recess last Monday.  They wanted to know why after it rains there are so many worms on the sidewalks.  So we did a test to see if we could find out.  We took some of the worms out of our compost bin and used them as guinea pig worms.  We covered half of a cookie sheet with a wet paper towel and half with a dry paper towel and did several trials to determine what the worms liked best.

The worms seemed to be undecided, half were inclined to go to the wet side and half on the dry side.  We decided to make it more like a rainy day, soaking the paper towels with a watering can. 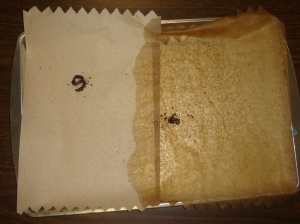 More of the worms headed for drier ground this time.  We then talked about why the worms might like it a little drier, but not completely dry.  Some of the kids said we should think about where they live, in the soil where it’s kind of moist all the time, and that led to determining if they liked dark or light better.  We again checked our compost bin and did not see any worms crawling around on the surface and when we mixed the soil we saw the worms dive for the darkness.  Just for the fun of it, we tried it with our worms we had out of the bin.

Most of the worms went under the paper or under a paper towel.  Then we wrote about it: 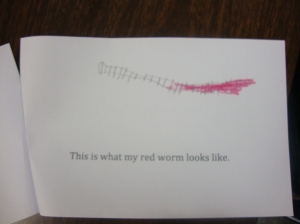 For those of you who follow me on Facebook or who know me personally, know that about a month ago I posted that I had some great news, but I couldn’t share it with you until the press release came out…well it did and now I can share my good news with you!! 🙂

I have been named a Bill and Martha Lee Armstrong Educator for the 2010-201 school year.  This award is given through IU Bloomington to teachers who are nominated by their principal/superintendent and who are then selected by the Armstrong committee.  I am VERY honored and humbled to have been chosen as one of six Armstrong teachers in the state of Indiana.  I will be working with some undergraduate students as well as professors/faculty.  I am also open to giving student teaching seminars, study sessions, and anything else that might present itself! 🙂

Here is a picture from the awards ceremony on Wednesday evening… 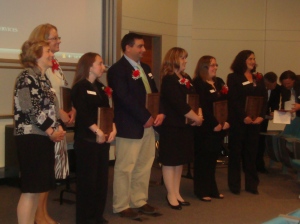 I am the second from the right.