I’m just in the beginning stages of getting our Math Work Stations set up.  Here are some pictures and descriptions of our first 9 stations.  I’m just introducing them at this point.  We will introduce the last 5 in the next week or so and then move on to using them as part of our daily math routine.  The most difficult thing for me with MWS is that they won’t have names like my Literacy Work Stations do.  They will have numbers because they focus on many of the same ideas.

Here are the labels on the first 5 tubs.  All of my tubs are labeled this way and I have corresponding numbers in a pocket chart across the room so that each pair of children know which tub to get that day.

The children make different shapes with geo-boards and geo-bands at this station. 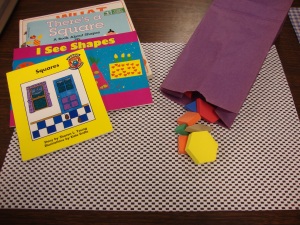 This game is called “Grab Bag” from Developing Number Concepts (Kathy Richardson).  One partner puts all the shapes in the bag and then picks one.  They keep it hidden from their partner and describe it to them until their partner is able to guess what it is.  There are also some shapes books included for them to read when they are done.  This station will eventually have 3D shapes in it when we start working on that standard later in the year.

This is Shape Dice Toss.  The children roll the die and draw which shape their die landed on.  The graph was given to me by a friend (but it doesn’t look to difficult to make) and the cubes are 1 inch pieces of wood that I drew shapes on with a permanent marker.

This activity comes from a Lakeshore Instant Learning Center box about Shapes.  The children each take a mat and the bag that matches and spin the spinner.  They pick a shape out of their bag that corresponds to the shape that they spun.  They play until all their shapes have been covered, then because there are two partners they can pick a different card and play again. 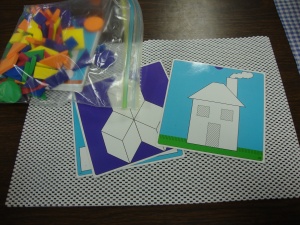 This activity comes from a Discovery Toys box called “Playful Patterns”.  The children create pictures using the foam shapes that were included in the box.

The rest of these activities come from Developing Number Concepts by Kathy Richardson.  In this game, “Dump and Check”, the children choose a number card and put that many cubes in the tub.  They then dump them out and check to make sure they have the right number of cubes by counting them.  They put all the cubes back and pick another card.  We will be adding numbers past 10 later, but right now we are working on 1-10. 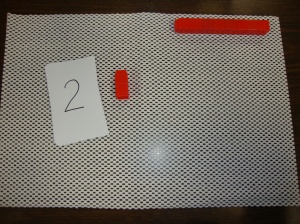 This game is similar, but there is no tub.  The children pick a card and build a tower with that many cubes.

The children are building different shapes out of cubes in this activity.  They are practicing copying designs from a paper into 3D objects. 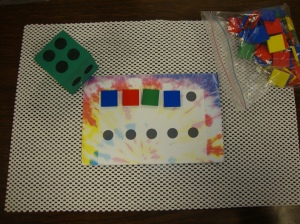 For this last activity, the children roll the die and then put that many tiles on their paper.  I printed dots on them using my computer, but you could use 5×7 index cards and sticky dots and get the same effect.  I was just using up some old printer paper that had a tie-dye design on it.  I thought it would make them look exciting! 🙂

To help my students remember what to do at each station, I took the pictures that I have placed above for you to see and printed them out in color on 8 1/2 x 11 paper.  I then taped a sheet protector inside the lid of each station and slipped in the corresponding picture.  I wanted my students to see how the activity should look on their math mats (non-skid shelf liner) as well as how to work their way through the activity.  I’ll be introducing the last 4 of these stations this week and then will just have 5 left.