This week, we melted different color ice cubes and then mixed the resulting colored water together.  We put our goggles on (because that’s what scientists do!): 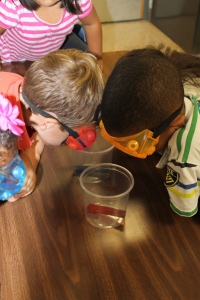 I made the ice cubes using food coloring and these ice cube trays:

We made predictions about what we thought would happen while we watched the ice cubes melt.  Some thought that one ice cube would melt and fill up the whole cup.  Others said it would change to a new color.  Some of the children thought we were going to let the ice cubes melt and then drink the juice that resulted.

We had to wait until the following day to check back on the ice cubes.  We talked about what happened (they melted) and the differences.  We drew in our science notebook a picture of how the ice cubes and cups looked when we started and then how they looked after they melted.