Sorry that I’ve been a little absent lately…I worked really hard during at least 5 days of my winter break so that I could come home from school for a few weeks and just relax!  I have some pictures that I’ve been taking and will get those posted later this week, but today, while watching the Inauguration, I worked on this set for Valentine’s Day/February Math Work Stations. 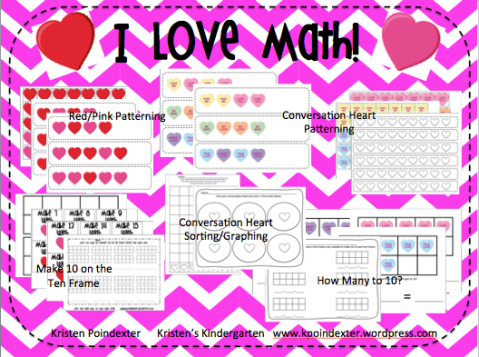 It’s a set of 5 activities that are quick and easy to set up and get going!  I’ve included all the manipulatives you might need, but you can add your own if you want to.  I found pink and red heart shaped table scatter at the Dollar Tree this weekend and some foam Conversation hearts from the Dollar Tree and in the Target Dollar Spot.  I plan on using them with these activities in my classroom, but I will let the kiddos have the real Conversation hearts when we sort and graph them on the sheets included in this pack.

Two different kinds of patterning cards are included and a recording sheet is included so the children can record their patterns. I’ve also added a Valentine’s Day “Make ____ on the Ten Frame” that is very similar to the winter and fall themed ones I have created before. I also put in a “How Many to 10?” game where children look at a Ten Frame with hearts in it and figure out how many more they need to make 10.  There is a spot on the bottom of each sheet for children to write the corresponding math sentence.  I’ve added a recording sheet for that activity as well, so using 2 different colors, students record combinations to 10.

I’m giving one pack away, so hop on over to my Kristen’s Kindergarten Facebook page and leave me a comment telling me what your favorite Valentine’s Day Math activity is! 😉

Click on the picture above to get your own pack> 🙂