Were you able to guess what I couldn’t wait to show you last week??

The nice folks at Constructive Playthings sent me a box of these Letter Vests to try out with my kiddos.

We’ve had so much fun the last two days trying these out!  I’ve got lots more ideas on how we are going to use them, but I thought I would get you started with these… 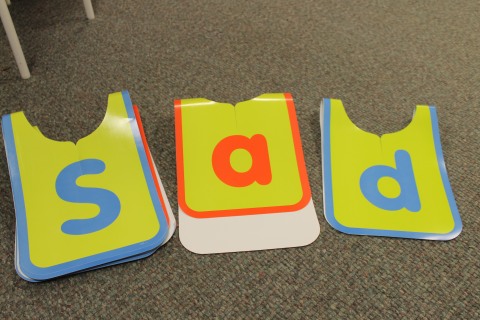 First, I love these vests because they are made of durable, thick, coated paper.  I can tell they are going to stand up to the wear and tear of my Kindergarten classroom.  They also have a nifty slot about 2 1/2 inches long right through the top of the letter to help the kiddos take them on and off easily and without ripping the paper!

Second, in the box there are ideas on how to use the vests and an entire list of all the word families you could ever want to make using these vests! 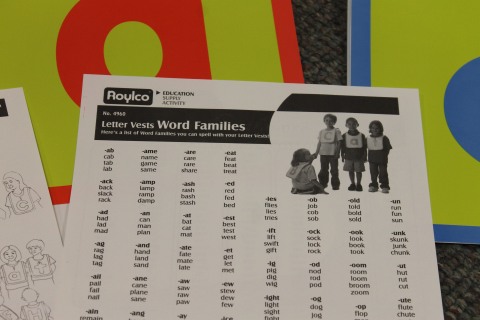 Also, I don’t know if you noticed or not, but on each vest, one side displays the lowercase letter and the uppercase is printed on the other side!!  I also love how the vowels are a different color from the consonants!  In addition, there are several extra letters (for a total of 32) so you can spell those words that have double consonants or vowels in them!!  They’ve thought of everything!! 🙂

I immediately thought of our blending and segmenting that we have been working on during our phonemic awareness portion of our day.  I thought the kiddos might be more excited about the words if they actually got to BE the words!

First, about 1/2 of my class donned their letters.  I purposely mixed all the letters up so that the kiddos weren’t dependent on alphabetical order to help them make words. 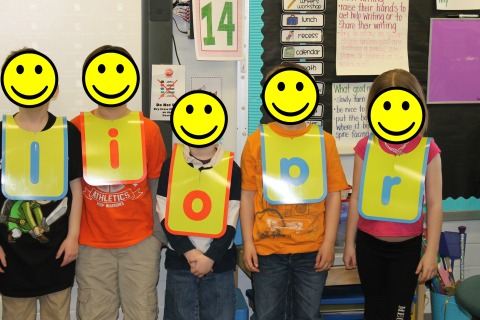 Here are some fine letters after they helped us make the word “lap”.

We then had a student point to each letter and we made the sound that the letters made and then we read the sounds together. 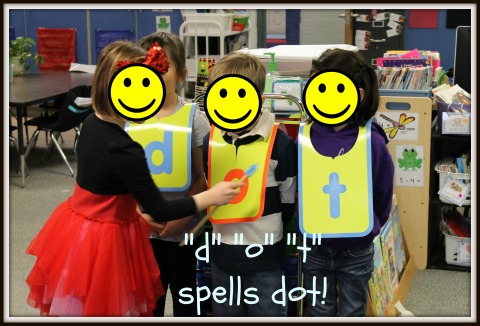 Again, here we are saying each sound and then reading the word as a whole.

To segment the words, I had a different set of kiddos come up with different letter vests and we again made some words.  After we made the word, and before reading it aloud, I asked the letters in that word to take one step away from each other, so they were separated a bit.  I then asked the kiddos to tell me what sounds they heard in that word.  For several of my kiddos who were struggling with segmenting, having the letters visually together and then separate, helped to cement in their minds what segmenting means.

I also know my kiddos love to read, but that we needed to add a new sight words game to the arsenal so they wouldn’t get totally bored learning them! I called one student to the front to be the pointer.  Her job was to point to the word that she wanted the kiddos to make.  The letters were supposed to come to the front and stand.  I didn’t tell the kiddos anything about putting themselves into the correct order, some groups did right away, and others (as you will see) left themselves scrambled. 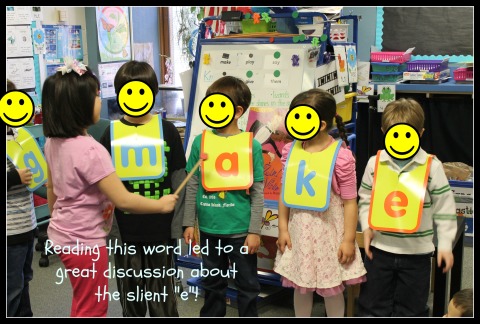 Making the word “make” led us to a terrific review of the “silent e”.  What really helped the kiddos to see that there was a silent e, was the fact that the vowels were a different color than the consonants.  Even the child who was pointing to the words noticed it when she was pointing for us.  She pointed to the “m”, “a”, “k”, and then the “e”.  I noticed that she hesitated a second on the “e”, as she noticed that it wasn’t making a sound that fit with the rest of the letters!  One of my student suggested that there we a third color of letter “e” in the box, so that it could be used to represent the silent e.  Powerful learning moment!!

How easy would it be to also practice a few word family words this way too??  Just change out the beginning sound…

Or how about nonsense words?  Just call a few random kiddos up and have them stand in a mixed up order…how fun!!

Next, she pointed to the word “play”. 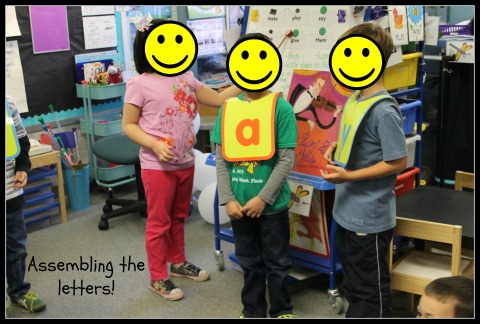 Here are the letters coming to the front… 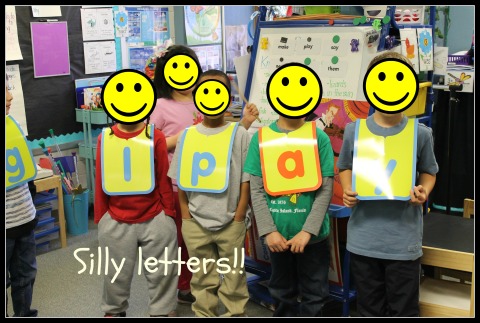 These letters aren’t quite in the right order…

One of my students noticed that as we were reading “play” aloud slowly, that it was difficult for her to separate the “p” away from the “l”, so we had a little mini review about letter blends.  How they are two letters that are more hooked together than other letters.  I no sooner had said those words than the moment below happened. 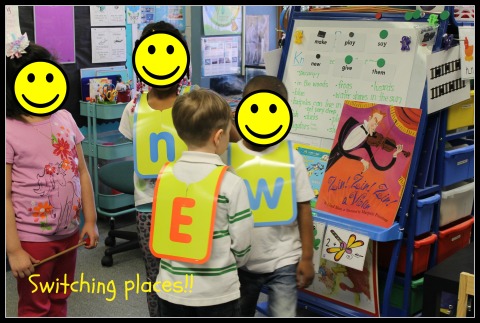 Of course…there was lots of this taking place as we all tried to figure out where we belonged in our “new” sight words!!

One of the last things we did before putting the letters up, was to have everyone wear a letter and then I asked the kiddos to put themselves into alphabetical order so that it would be easier for me to find the letters next time we use them.

Thank you so much to Constructive Playthings for sending these my way and letting me try them out with my kiddos!!  We definitely have a fun new game to play to help us learn all our sight words!

Also, the folks at Constructive Playthings shared that they are doing an April Showers Giveaway.
Throughout the month of April, Constructive Playthings will be showering gifts on their friends and fans. To qualify, like their Facebook page and sign up with your email address. They will be choosing winners randomly two times per week. Click here to enter.

Make sure you “Like” them on Facebook for your chance to enter to be “showered” with gifts. 🙂 How easy is that??

Click above to enter the giveaway and then click any of the pictures or links above to go get some of these AWESOME letter vests of your own!!

What are some other ways you can think of to use these Letter Vests in your classroom??  I can’t wait to hear all your ideas! 🙂

Leave me a comment below and I’ll pick a winner in a few days to send a few of my Tpt products to. 🙂

I was contacted a few weeks ago by Constructive Playthings about doing a product review–and because I literally drool over the catalog each time we get a new one at school (my wishlist is huge!!), I told them I would be more than happy to review a product…but I’m not going to show the whole thing to you just yet. 🙂  I need to build up some suspense…okay, not really, but I want to show you how this product works in a Kindergarten classroom–I’ve already come up with a bunch of ideas for using these:

This is the only clue you’re getting for now. 🙂  What do you think it is and what might I be going to do with it?  I will tell you, its not my Super Teacher cape–although…that does sound like something I should look into. 🙂  Because we are on Spring Break, I don’t have any models to show you this product in action just yet…it will all soon be revealed. 🙂
Also, the folks at CP Toys shared that they are doing an April Showers Giveaway.
Throughout the month of April, Constructive Playthings will be showering gifts on their friends and fans. To qualify, like their Facebook page and sign up with your email address. They will be choosing winners randomly two times per week. Click here to enter.
Make sure you “Like” them on Facebook for your chance to enter to be “showered” with gifts. 🙂
Any guesses on what the product might be?
Kristen 🙂