All this week, we have been learning about insects.  This was a new unit to me (I usually teach about them as they come up in stories or during teachable moments).  I really could have done lots more with this idea than I did, but I was sort of pressed for time.  I will probably come back in a few weeks and talk some more about them.

These are the books that I had out in my Library Work Station during our Insects theme.

This area has be come one of our Science Stations, I have since expanded to ANOTHER table! 🙂

One of the activities we did was to sort various bugs/insects/other backyard critters into categories. 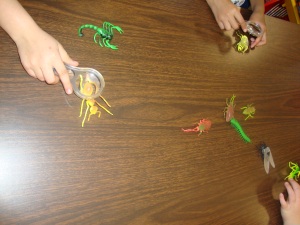 This is our OWL chart right before observing the plastic critters.  I had the children observe the critters and that’s how we fill out the “O” section.

One of the books we read…where we discovered that Insects are NOT bugs.  I need to stop called all bugs, bugs, they have different names! 🙂

Even though this is not an “official” IB unit (we did Ponds), we all are continuing to have these large question marks up in our classroom to help us to remember to write down the great questions the children have so that as we are learning we can answer them. 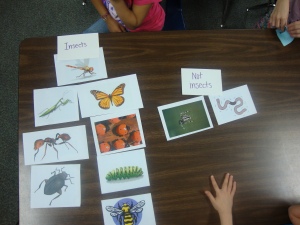 Sorting clip art pictures of Insects/Not Insects.  As I observed the children sorting in table groups, I heard some interesting discussions going on.  The threw in some “tricky” critters as an assessment–we ended up having a great group discussion about where the worm, stag beetle, and caterpillar belonged.

Here we are discussing the stag beetle.  Many children had counted his antennae and thought those were legs, so the children were having a discussion about that.  It was really neat to see them listening to each others ideas without interruption, and coming to a class consensus.

The beetle and caterpillar ended up under Insect and the worm ended up under Not Insect (we will revisit this activity to see if there opinions have changed in the next few weeks). 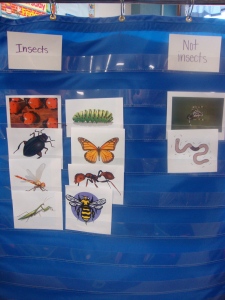 I made a list of critters and printed them off from Microsoft clip art.  We were reading The Grouchy Ladybug this week as well, so I tried to pull some things from that book.  When I re-assess, I will put in more Not-Insects and several that we have named Bugs.